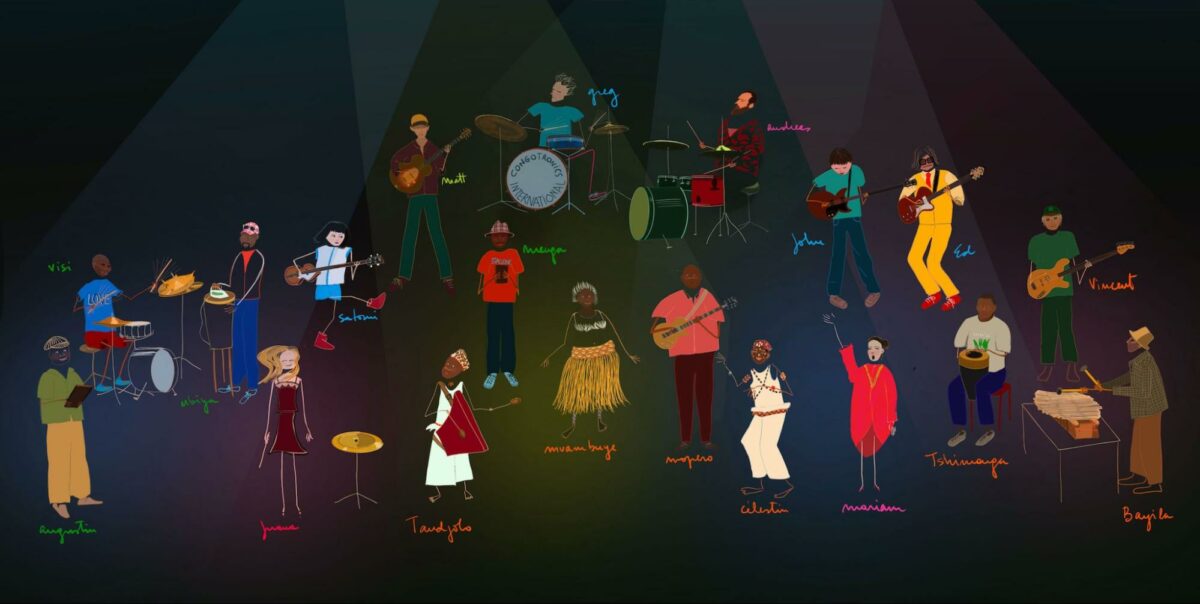 Congotronics International—a supergroup comprised of Konono Nº1, Kasai Allstars, Deerhoof, Juana Molina, Wildbirds & Peacedrums, and Skeletons’ Matthew Mehlan—will release their epic collaborative new album, Where’s The One?, on April 29TH, 2022, via Crammed Discs. Eleven years lovingly in the making, Where’s The One? gathers 19 musicians from across four continents, working together to create a new musical language that combines the traditional music of the Congolese artists with the various experimental rock styles of their admirers based in Europe and the Western Hemisphere. Its 21 electrifying songs consist of live concert recordings and studio tracks produced in the years before, during, and after their Congotronics vs. Rockers tour. The 2011 tour brought these acts together for the first time—all in all, ten lead vocalists, five guitarists, three likembe players, five percussionists, two bass players (including Crammed Discs’ Vincent Kenis, the co-founder of Kasai Allstars and curator/producer of the Congotronics series), and three drummers—for performances at 16 major festivals and venues in ten countries. Where’s The One?’s dynamic first two singles preview all sides of the recording: the danceable, triumphant and generally wild “Banza Banza,” which showcases Kasai Allstars’ powerhouse lead vocalist Kabongo Tshisense, and the dreamy, folk-inflected instrumental “Beyond The 7th Bend,” written and performed by Kasai Allstars’ Tshisense and Mopero Mupemba, alongside Mehlan and Molina, which intermingles Western & African guitars and a Congolese thumb piano. The album features cover art drawn by Molina that portrays all the participants on stage, and will be available for pre-order digitally and physically on March 18th as a double vinyl LP/CD (its package includes a thick booklet with pictures and extensive liner notes). It all started when the music of Konono Nº1 and Kasai Allstars was first released in the U.S. and Europe in the later part of the ‘00s. With its blend of ritual music, traditional percussion, thumb pianos, electric guitars, and makeshift instruments made from junkyard scrap, their out-of-this-world sound—now also known as Congotronics, a word coined to title Crammed Discs’ series of releases introducing the world to Congolese acts like Konono Nº1 and Kasai Allstars—deeply resonated with musicians and fans worldwide. Many artists across avant-rock, electronic, and hip hop (including Dirty Projectors, Andrew Bird, Animal Collective, Deerhoof, Beck, Björk, Wilco, Radiohead, Saul Williams, Questlove, and more) repeatedly cited the Congotronics bands as major sources of inspiration in their own work. After curating a tribute album by 26 rock and electronic artists, 2010’s Tradi-Mods vs Rockers: Alternative Takes on Congotronics, Crammed Discs pushed the idea further and initiated the Congotronics vs. Rockers tour, which resulted in the formation of the Congotronics International supergroup. For several months ahead of the tour, a fascinating remote writing process began to take place. Demos started flying back and forth over the internet. Someone would start a song and send it on to the others, the same track sometimes traveling three times around the globe as Vincent Kenis was in Kinshasa with the Congolese artists, while Juana Molina, Deerhoof, Skeletons’ Mehlan, and Wildbirds & Peacedrums worked from their respective studios located in Buenos Aires, New Mexico, New York, and Stockholm. Everyone eventually flew to Brussels to finish writing what would become Where’s The One?, and to rehearse for the Congotronics vs. Rockers tour. During these intense sessions, the specificities of the supergroup emerged: there was to be no leader, with everything conceived collectively, and many languages were spoken in the band (Lingala, Tshiluba, English, Spanish, French, Swedish), but few people spoke more than one or two. The musical languages were another story, however, and simultaneously more and less mutually intelligible: more, because verbal communication wasn’t always necessary in those matters; less, because massive gaps sometimes needed to be bridged (the album title itself Where’s the One? refers to this barrier and the initial difficulties in agreeing on how to understand each other’s rhythms: “where does the first beat actually fall?”). The recording process continued remotely on and off in the 11 years that followed until it was finalized in 2021 by Deerhoof’s John Dieterich and Greg Saunier and Crammed Discs’ Marc Hollander. The album’s mixing by Saunier serves to elevate its live recordings into a seamless whole alongside the studio tracks. Congotronics International is ultimately an ephemeral supergroup, however the strong bonds and mutual respect that was born between all musicians has led to some of its members collaborating with each other in the time since (in 2017, Molina was featured on Deerhoof’s Mountain Moves LP, while Dieterich worked on her Halo LP; more recently, Deerhoof remixed a track on Kasai Allstars’ 2021 release The Black Ants Remixes). A feature-length documentary of Where’s The One?, which offers an inside look at the initial encounters and concerts filmed and directed by Pierre Laffargue, is also set for release later this year.

Where’s The One? Tracklist: 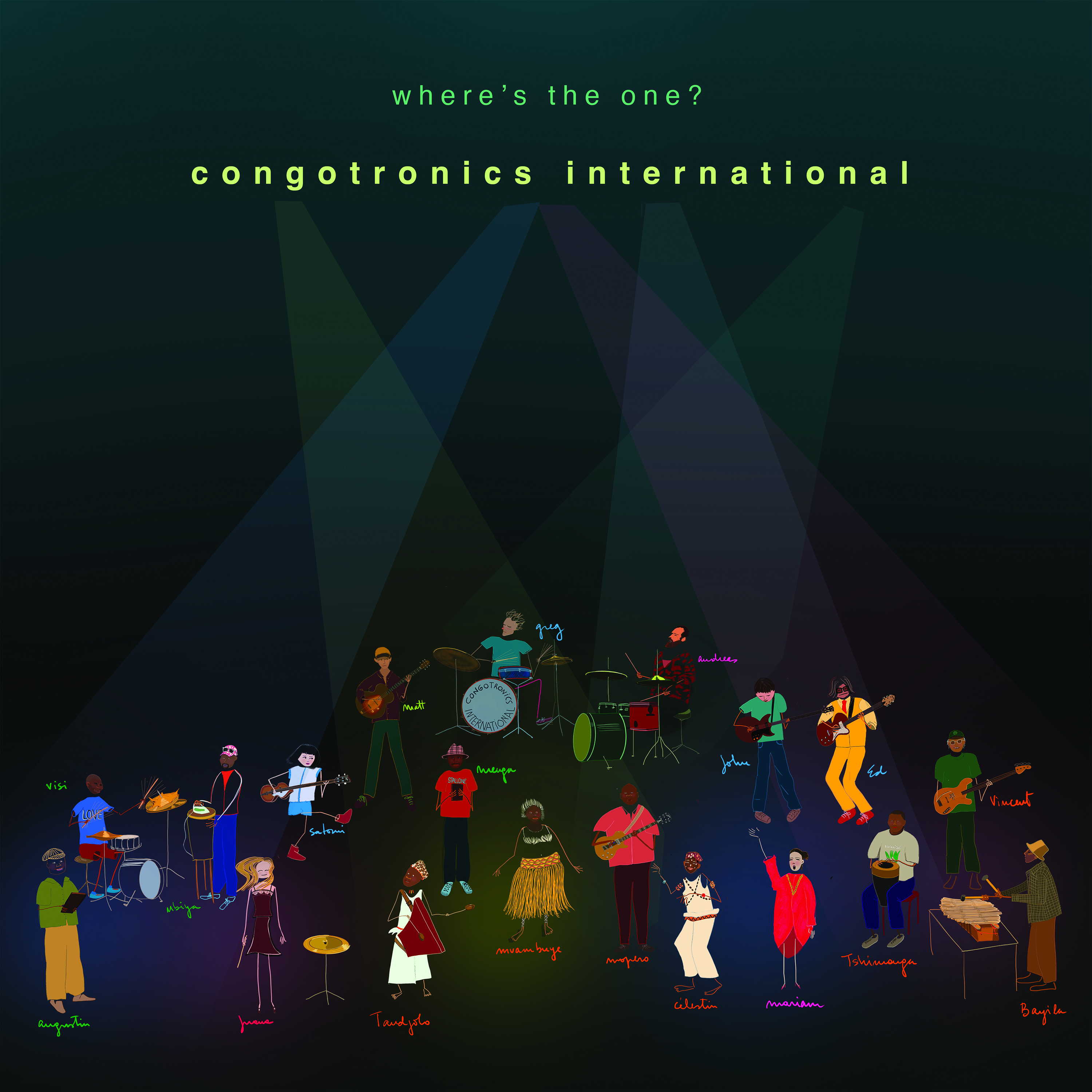 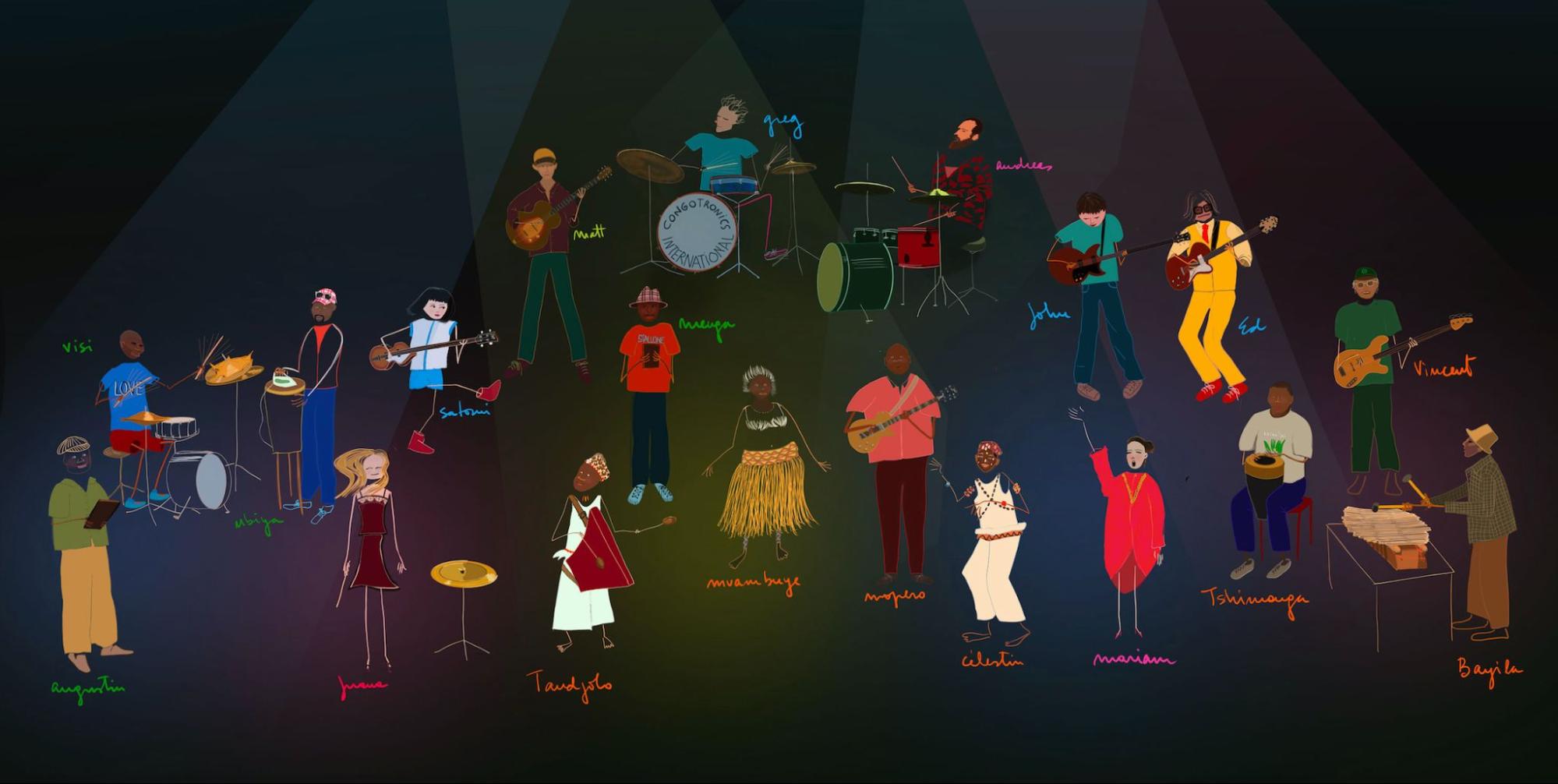