Divino Niño are no strangers to bold reinvention. When Camilo Medina and Javier Forero—friends whose bond dates back to their childhoods in Bogotá, Colombia—moved to Chicago and recruited guitarist Guillermo Rodriguez to form a band, they were psych-pop outsiders playing live shows with a drum machine. With the addition of drummer Pierce Codina, their 2019 breakthrough and debut LP for Winspear, Foam, solidified their place as local indie rock mainstays. Soon after, multi-instrumentalist Justin Vittori joined to round out their lineup. Once again, with their masterful, unpredictable, and eminently danceable new album, the band has done something radical: They totally upended the way they write songs, eschewing practice room jams for unrelentingly collaborative beats, implied grooves for immersive dance floor heaters, and mellow vibes for frenetic doses of reggaeton, electropop, and trap on their most adventurous and ambitious work to date. Welcome to the Last Spa on Earth.

Written and recorded over the past two years, Last Spa on Earth deals in release and catharsis: confronting your darkest moments and coming out better for it. “For most of my life, I was just perfectly happy listening to really chill music and drawing flowers,” says Medina. “Having no choice but to sit with ourselves during the pandemic was dark but it was also therapeutic dealing with what we weren’t dealing with before.” By staying present, the band decided to make music that matched what they were going through: something heavy, fast, direct, and resonant that ultimately felt good no matter how challenging. Like a necessary massage, the Last Spa on Earth of the album’s title is Divino Niño working through their own knots and kinks.

Following the release of Foam, which elevated them from Chicago underground heroes to the national stage, Divino Niño went on an exhaustive North American tour with Crumb. It’s here where the earliest inspirations for Last Spa on Earth began to form. “When you’re in front of big audiences, you see what works and what hits people rhythmically,” says Codina. “We started pushing the tempo live, having more energy, and getting into a more dancey arena. Seeing people dance shifted our mindset – we became a little bit bored with playing mid-tempo indie songs.” With this new perspective, their approach shifted. Instead of getting everyone in a room together to hash out songs with guitars, they decided to become more immersed in crafting beats, layering tracks, adding parts, and tweaking melodies obsessively.

To write and record the LP, the band decamped to two cabins, one in Northern Wisconsin for 10 days and another outside Atlanta later on in the process. These early sessions were frantic and full of pent-up energy. “Since we were all making music separately, we did a show and tell until we found something we gravitated to, and then we just pursued that feeling,” says Forero. “We got disoriented by how creative we were: things became really blurry and we had no idea what time of day it was.” One of the earliest songs that started from these overwhelming days of being together, clocking long hours in the studio, and cooking meals together is “Nos Soltamos.” What originally started as an uptempo punk-inflected rocker became something weirder, and glitchier. There are trumpet stabs courtesy of Whitney’s Will Miller and woozy lap steel from Twin Peaks’ Colin Croom. According to Medina, the song deals with embracing release. “It’s really about how important it is to unload all you carry around,” he says. “Not letting go will slow us down and keep us from living truthful lives.”

The pulsating groove on single “XO” is a good example of such release. Inspired by Medina and Forero’s repressive and restrictive religious upbringing, the track gleefully blends the sacred and profane. “I just thought: let’s put the bible and an ass right next to each other in the lyrics,” laughs Medina. “If there was any trauma hanging from our upbringing, we were able to deal with it here.” On the track, anchored by synth chords Forero laid down and inspired by J Dilla’s beats, Rodriguez raps a blistering first verse. Unlike Foam, which was predominantly English, a majority of the songs are now in Spanish (this offering is one of the few bilingual exceptions on the LP). “There’s a reason there’s more Spanish on this record,” says Forero.” We just felt like because that’s our native language, we wanted to bring the band more into our music and that feels more true to who we are.”

Songs like the high-velocity “Tu Tonto” are indebted to the rhythms and attitudes of neoperreo, the women-led internet subgenre of reggaeton, while others like the bass-heavy “Miami” and “Ecstasy” take their cues from House music and South American trap. But it’s not always a party here: as much as these grooves hit immediately on the dance floor, the band pays close attention to mood and comfort too, taking inspiration from tranquil meditation music on opener “LSE” and blissed-out low key pop on songs like “Papelito,” which features Enjoy aka Wyatt Shears of the Garden. The cinematic “Drive” feels like an amalgamation of Divino Niño specialties: dream-like arrangements, swaggering sections of booming bass, and delectable grooves. It’s at that high-contrast sweet spot between cozy and confrontational where the band thrives.

Part of the reason Divino Niño is able to seamlessly and enthusiastically traverse so many genres is their undeniable chemistry and tightened bond as a cohesive group of standout individuals – just like the songs on their album. While recording at the cabins, in between trips to the jacuzzi and their studio, they realized how crucial each band member has been to making this record. “There is a legitimate reality to the way we work, which is that it’s a true collaborative thing and we all bring our own strengths to the table,” says Medina, noting how the band embodies different Tarot archetypes, astrological signs, and personalities. “We got really into graffiti while making this record,” says Forero. “I think the reason why is we basically took the songs we were writing and we vandalized them. We might keep the core of the idea but we wanted to rip apart our own work.” Medina laughs and says, “It feels good to be vandalized.”

The album artwork, done by Medina, a longstanding visual artist, depicts a dreamy, yet graffiti-tagged spa, void of physical bodies so listeners can envision themselves in this unique environment. It represents the yin and yang approach Divino Niño took while creating the album: the serenity of the spa and the chaos of the party, fire and ice, wind and rain. In place of songs about love, these tracks were crafted as a self-help guide – different pages of a book that tell the story of the band processing their lives. Ultimately, the band’s desire is to provide healing in the same way one feels after sweating, shivering, stretching, and resting at the spa against the backdrop of the world’s darkness.

Last Spa on Earth is the cathartic product of Divino Niño letting go of their musical preconceptions, past traumas, and future anxieties to embrace change, chaos, and each other’s contributions both to these songs and to each other. 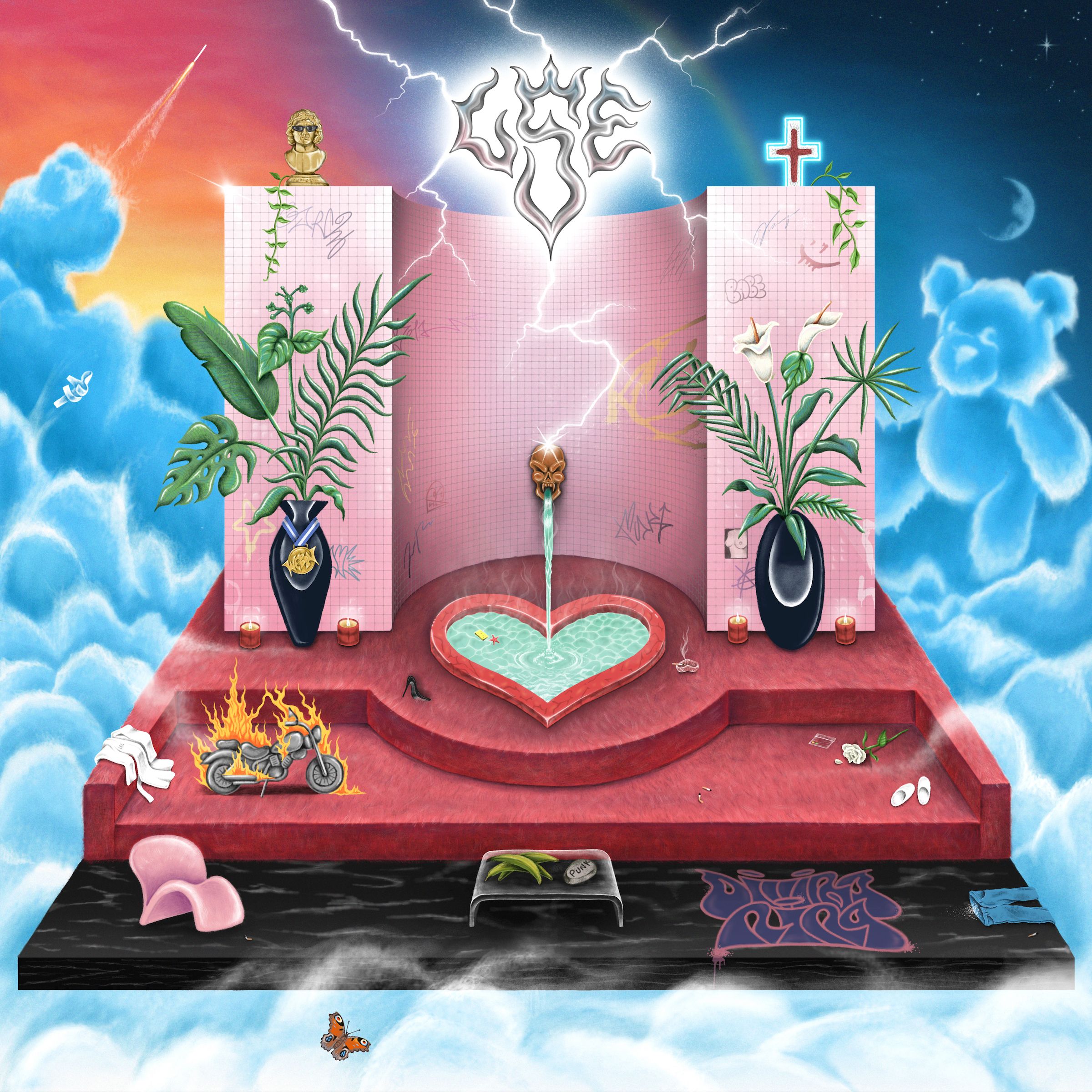